The Financials are what Happens Because of the People

I’ve thought a lot about investment opportunities and why they do or do not work out. I often frame this up for companies around mergers/acquisitions.

Here’s what is interesting: according to 2016 research from L.E.K. consulting analyzing 2,500 mergers, over 60% fail.

This seems almost impossible on the surface. Before a merger ever becomes official, there are countless hours of research, analysis, prep, financial statement review, and quite possibly hundreds of meetings of key stakeholders about what the deal will mean. There’s a lot of prep.

But even with all that prep, over 6 in 10 are actually destroying shareholder value.

How is that possible?

Well, it’s actually entirely possible — and factual, as we’ve shown — because the prep focus is misguided. It’s too much about the financials and not nearly enough about the people.

Think about it in these simple terms: usually, organizations of any size try to scale up with a sales function at the very least. So whenever there’s an acquisition, by definition you’re going to combine two sales functions — and often two marketing functions, two operations functions, etc.

Those are people. The people had different processes and workflows and relationships and managers and ways stuff gets done. Now you’re combining those two units into one, essentially. That’s going to change a lot about the people, how they feel, how productive they are, etc.

And the people are what drive the business. The financials are what happens because of the people. So you need a way to figure out what’s going to happen with the people and the teams on any investment deal.

As our research has shown us, the core of the problem is not the high number of M&A deals in itself, but rather that too many executives bring insufficient discipline to the evaluation process that fuels these deals — as a result, they often get deals wrong. For instance, despite the importance of accurately identifying and calculating company synergies, diligence work frequently results in an overly optimistic view of the revenue synergy opportunity. Often the weakest assumptions involve estimates of how much additional revenue the companies can generate when combined. This, in turn, leads bidders to overpay.

Wolff Olins’ recent leadership study backs up these points. It indicated a shift from a concentration on outputs like sales to inputs like creating and building culture. This is in line with the power of building winners over trying to win. The CEOs surveyed talked about the need to hold their reins looser with the new generation, about the need to be more comfortable with ambiguity as they let their employees take greater leadership roles.

McKinsey has even done a graphic on cultural effects in mergers: 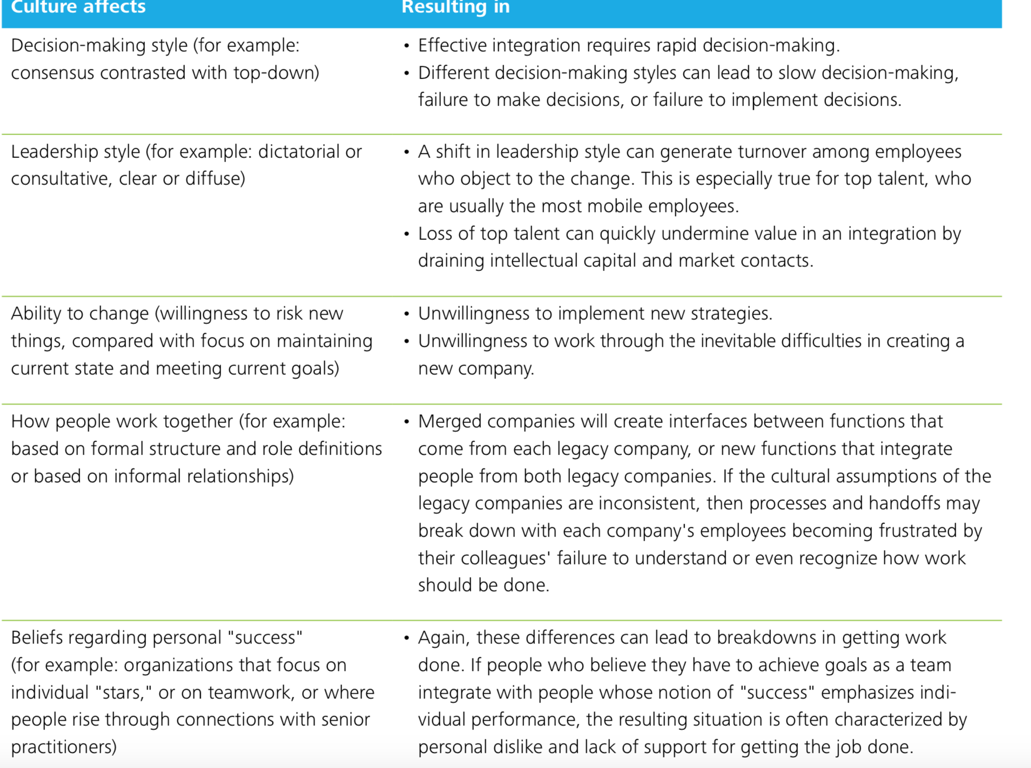 In short: you can’t just focus on the financials and the top/bottom-line implications of the deal. Those are important, but they can’t be the be-all and end-all — because if the people don’t align and the teams can’t mesh, those revenue projections are going to be off anyway.

I help with this by applying Teamability® tech – to the people side of investment opportunities, so that you can be more confident in the eventual outcome. Feel free to contact me and learn more! I love helping people get these deals right by understanding the human side of the equation.